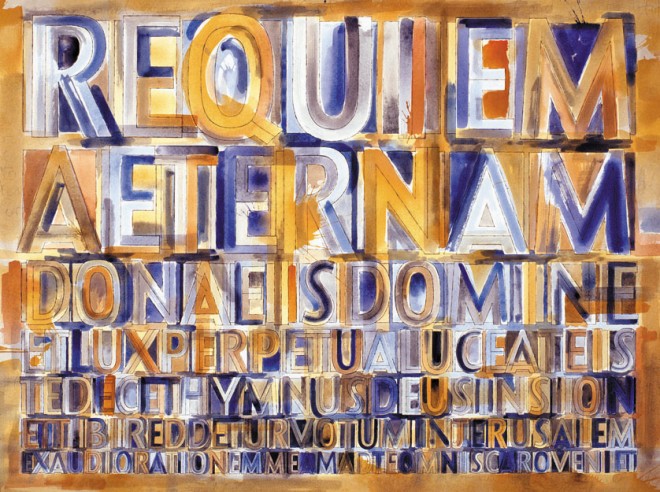 Lines from the Latin Missal

The writer of these words has long been forgotten. His or her sentiments ‘speak’ across the years and may have helped many who have grieved over dead and departed family or friends. The ancient Latin used here (a dead language today, a dying language at the time) has a wider cultural cachet than the vernacular, and it is understood by many. I am attracted to these words because of this, as well as to their anonymous source.

Language that has survived centuries of use has an inherent history. As I painted I felt included in the continuum with all those who have made language visible for the thousands of years before printing.

Co-incidentally, I saw the live television broadcast of the destruction of New York’s twin towers as I was working on the piece. One of my memories of looking at the television coverage was the colour of the sky: absolutely blue. The original colour palette for this work had a lot of grey and black in it but I could not exclude blue. However, I did not foresee that almost the same blue would appear a few weeks after finishing the painting, when I saw television news footage of B52 bombers, high in an Afghan sky, as they, in their turn, conducted their mission of killing and maiming. ‘Requiem aeternam…’